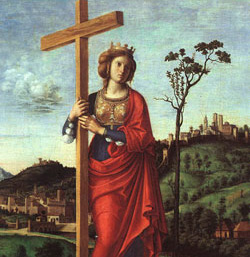 St Helena was an Empress of the Roman Empire, and mother of Emperor Constantine the Great. Born in Drepana, Bithynia in Asia Minor, she became the consort of the future Roman Emperor Constantius Chlorus and the mother of the future Emperor Constantine the Great. She ranks as an important figure in the history of Christianity and of the world due to her major influence on her son. In her final years, she made a religious tour of Syria Palaestina and Jerusalem, during which she allegedly discovered the True Cross. Pious beliefs also associate her to the foundation of the Vatican Gardens.

Helena's birthplace is not known with certainty. The 6th-century historian Procopius is the earliest authority for the statement that Helena was a native of Drepanum, in the province of Bithynia in Asia Minor. Her son Constantine renamed the city "Helenopolis" after her death around 330, which supports the belief that the city was her birthplace.The Byzantinist Cyril Mango has argued that Helenopolis was refounded to strengthen the communication network around his new capital in Constantinople, and was renamed simply to honor Helena, not to mark her birthplace. There was also a Helenopolis in Palestine and a Helenopolis in Lydia. These cities, and the province of Helenopontus in the Diocese of Pontus, were probably both named after Constantine's mother.

It is unknown where she first met Constantius.The historian Timothy Barnes has suggested that Constantius, while serving under Emperor Aurelian, could have met her while stationed in Asia Minor for the campaign against Zenobia. It is said that upon meeting they were wearing identical silver bracelets; Constantius saw her as his soulmate sent by God. Barnes calls attention to an epitaph at Nicomedia of one of Aurelian's protectors, which could indicate the emperor's presence in the Bithynian region soon after 270. The precise legal nature of the relationship between Helena and Constantius is also unknown. The sources are equivocal on the point, sometimes calling Helena Constantius' "wife", and sometimes, following the dismissive propaganda of Constantine's rival Maxentius, calling her his "concubine". Jerome, perhaps confused by the vague terminology of his own sources, manages to do both.

According to one tradition, Helena acquired the Holy Tunic on her trip to Jerusalem and sent it to Trier.

Several relics purportedly discovered by Saint Helena are now in Cyprus, where she spent some time. Among them are items believed to be part of Jesus Christ's tunic, pieces of the holy cross, and pieces of the rope with which Jesus was tied on the Cross. The rope, considered to be the only relic of its kind, has been held at the Stavrovouni Monastery, which was also founded by Saint Helena.