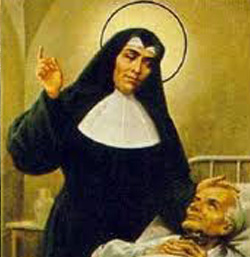 In her childhood, she demonstrated a strong concern for the plight of the poor in her area and she often took them to the home of her maternal aunt Rosa so that proper aid could be provided to them. She later moved elsewhere in Lleida to live with another aunt of hers and began teaching soon after in Barcelona in small Argensola at age nineteen when she felt called to the monastic religious life.

Pius XII beatified Ibars in Saint Peter's Basilica on 27 April 1958 upon the acknowledgment of two miracles attributed to her intercession while the confirmation of another two in 1973 allowed for Pope Paul VI to canonize her as a saint on 27 January 1974.

Her beatification was celebrated under Pope Pius XII on 27 April 1958 in Saint Peter's Basilica while Pope Paul VI later canonized her as a saint in 1974.