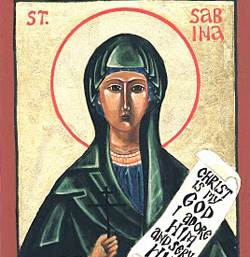 St Sabina matron and martyr from Rome. The widow of Senator Valentinus and daughter of Herod Metallarius. After her female slave Saint Serapia (who had converted her) was denounced and beheaded, Sabina rescued her slave's remains and had them interred in the family mausoleum where she also expected to be buried. Denounced as well, Sabina was accused of being a Christian by Elpidio the Prefect and was thereupon martyred in the year 125 AD in the city of Vindena in the state of Umbria, Italy.

We know St. Sabina only through legend, and there is some question as to it's trustworthiness. Even the century in which she lived is unknown. Supposedly Sabina was converted to Christianity by her Syrian servant Serapia. During the persecution of Emperor Hadrian, Serapia suffered martyrdom for her Christian Faith. It is believed that St. Sabina was murdered for the Faith about a month later. The reknowned basilica on the Aventine in Rome is dedicated to and named after her.

Sabina was later canonized as a saint, her feast day being celebrated on August 29. In 430 her relics were brought to the Aventine Hill, to a specially built basilica— Santa Sabina — on the site of her house, originally situated near a temple of Juno. This house may also have formed an early Christian titular church. The church was initially dedicated to both Sabina and Serapia, though the dedication was later limited to Sabina.