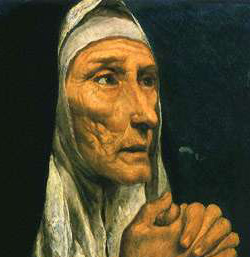 St Monica (c.331/2- 387) (AD 322–387), also known as Monica of Hippo, was an early Christian saint and the mother of St. Augustine of Hippo. She is remembered and honored in most Christian denominations, albeit on different feast days, for her outstanding Christian virtues, particularly the suffering caused by her husband's adultery, and her prayerful life dedicated to the reformation of her son, who wrote extensively of her pious acts and life with her in his Confessions. Popular Christian legends recall Saint Monica weeping every night for her son Augustine.

Because of her name and place of birth, Monica is assumed to have been born in Thagaste (present-day Souk Ahras, Algeria). She is believed to have been a Berber on the basis of her name. She was married early in life to Patricius, a Roman pagan, who held an official position in Tagaste. Patricius had a violent temper and appears to have been of dissolute habits; apparently his mother was the same way. Monica's alms, deeds and prayer habits annoyed Patricius, but it is said that he always held her in respect.

When she was very young, she was married off to the Roman pagan Patricius, who shared his mother's violent temper. Patricius' mother lived with the couple and the duo's temper flares proved to be a constant challenge to young Monica.

Monica had three children who survived infancy: sons Augustine and Navigius and daughter Perpetua. Unable to secure baptism for them, she grieved heavily when Augustine fell ill. In her distress she asked Patricius to allow Augustine to be baptized; he agreed, then withdrew this consent when the boy recovered.

For years Monica prayed for her husband and mother-in-law, until finally, one year before Patricius' death, she successfully converted them.