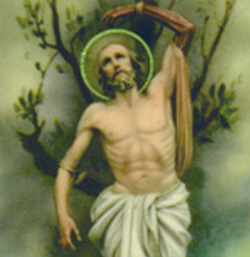 St Bartholomew was one of the Twelve Apostles of Jesus. He has been identified with Nathanael, who appears in the Gospel according to John as being introduced to Christ by Philip (who would also become an apostle), although some modern commentators reject the identification of Nathanael with Bartholomew.

All that is known of him with certainty is that he is mentioned in the synoptic gospels and Acts as one of the twelve apostles. His name, a patronymic, means "son of Tolomai" and scholars believe he is the same as Nathanael mentioned in John, who says he is from Cana and that Jesus called him an "Israelite...incapable of deceit." The Roman Martyrology says he preached in India and Greater Armenia, where he was flayed and beheaded by King Astyages. Tradition has the place as Abanopolis on the west coast of the Caspian Sea and that he also preached in Mesopotamia, Persia, and Egypt. The Gospel of Bartholomew is apocryphal and was condemned in the decree of Pseudo-Gelasius.

Bartholomew comes from the Aramaic may meaning son of Talmai or son of the furrows (perhaps a ploughman). Bartholomew is listed among the Twelve Apostles of Jesus in the three Synoptic gospels: Matthew, Mark, and Luke, and also appears as one of the witnesses of the Ascension on each occasion, however, he is named in the company of Philip. He is not mentioned by the name Bartholomew in the Gospel of John, nor are there any early acta, the earliest being written by a pseudepigraphical writer who assumed the identity of Abdias of Babylon and to whom is attributed the Saint-Thierry Manuscript and Pseudo-Abdias Manuscripts.

Along with his fellow apostle Jude Thaddeus, Bartholomew is reputed to have brought Christianity to Armenia in the 1st century. Thus, both saints are considered the patron saints of the Armenian Apostolic Church.

He is said to have been martyred in Albanopolis in Armenia. According to one account, he was beheaded, but a more popular tradition holds that he was flayed alive and crucified, head downward. He is said to have converted Polymius, the king of Armenia, to Christianity. Astyages, Polymius' brother, consequently ordered Bartholomew's execution.