Saint of the Day Online -St Andrew the Scot 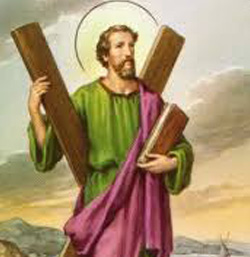 St  Andrew the Scot was the brother of St. Brigid the younger, born in Ireland near the beginning of the ninth century to a noble family. Both Andrew and his sister studied under St. Donatus. Andrew even accompanied Donatus on his pilgrimage to Italy and there Andrew earned his titles of Andrew of Tuscany and Andrew of Fiesole

Archdeacon and companion of St. Donatus. Andrew and his sister, St. Bridget the Younger, were born in Ireland of noble parents.They were educated by St. Donatus, and when Donatus went on a pilgrimage to Italy, Andrew accompanied him. In Fiesole, through a miracle, Donatus was elected bishop. Andrew was ordained the archdeacon of Fiesole, serving Donatus for forty-seven years. He also founded a monastery in Mensola, Italy.

There is a miracle reported of his healing the daughter of a nobleman while he was in Fiesole. The girl had been paralyzed and the doctors were unable to help her so their father asked Andrew to come and pray for her. Kneeling by her couch he told her to stand for Jesus had healed her. Many other miracles were performed by him over the course of his deaconship in Fiesole: casting out demons, healing the blind, and the sick.

His body is buried at St Martin's, the church he restored. When at a later date his remains were exhumed, his body was found still preserved. His relics remain to be venerated in that church.

St Andrew's feast day is on the 22 of August.